Ireland – the most westerly point of Europe, the last isolated island before the Atlantic Ocean. The Greeks and Romans called it Hibernia meaning ‘the land of winter’. Whilst there exists small communities where Irish is spoken, these are few and far between and it is a version of English which now dominates. Hiberno English has its own unique grammar, the origins of which are a combination of Gaelic, Irish Gaelic and Medieval Old Irish and 17th Century English from Western England.

That such a small island could be responsible for producing so much literary excellence (think Yeats, Shaw, Joyce and Wilde, Sean O’Casey and Jonathan Swift to name but a few) seems hard to believe but it is perhaps testament to the love of the Irish for their country. For there is an innate pride in their country in those of Irish descent. Since Prehistory people have dwelt in Ireland and some of their beliefs, traditions and folklore still influence attitudes today.

The history of Ireland is turbulent and complex. Although never a part of the Roman Empire, evidence exists that several Roman trading posts were established on east coast. The country suffered invasion from the Vikings and the Normans but by the 17th century power lay in the hands of the ‘Ascendency’ which referred to the descendants of English colonists,  and it was governed by England. It wasn’t until 1922 that Southern Ireland gained its status as the Irish Free State.

It was during the Viking era, when their chosen point of entry to Ireland was the Liffey Eestuary, that Dublin became an important international trading centre on route to the Baltic, Scandinavia and the Middle East. During the 18th century it became a great Georgian city and many of the fine houses still exist. Unfortunately those around O’Connell Street became the slum tenements so often depicted in the plays of Sean O’Casey. 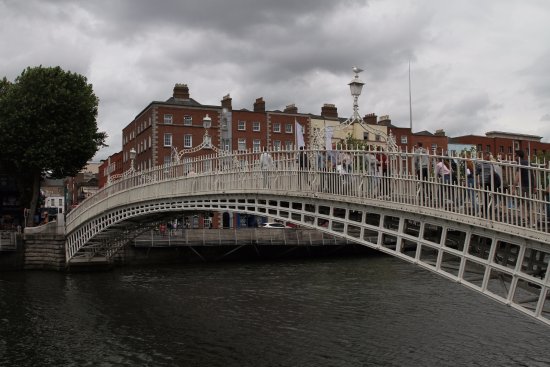 The late 1990s and first decade of the Millennium saw a significant transformation of Dublin’s derelict quays and docklands and, in common with most other large towns and cities in Ireland, Dublin saw an unprecedented building boom which made it into the cosmopolitan, vibrant city that it is today.  During this time a cultural and economic explosion took place and the country became wealthy beyond expectation; the ‘Celtic Tiger’ was born. Despite a falter in 2003, in terms of financial stability a prosperous future looked assured but the country hadn’t anticipated the worldwide financial crash of 2008 and Ireland’s building industry collapsed leading several major banks into bankruptcy and leaving the Government with massive debts and economic problems which they are still trying to resolve – a new chapter in the ever-changing history of this small, naturally beautiful island. The Irish have a reputation for friendliness, for hospitality and generosity and from the times I’ve spent there, I know this to be true.

I said at the start that there is an innate pride in their country in of those of Irish descent. I’m one of them.